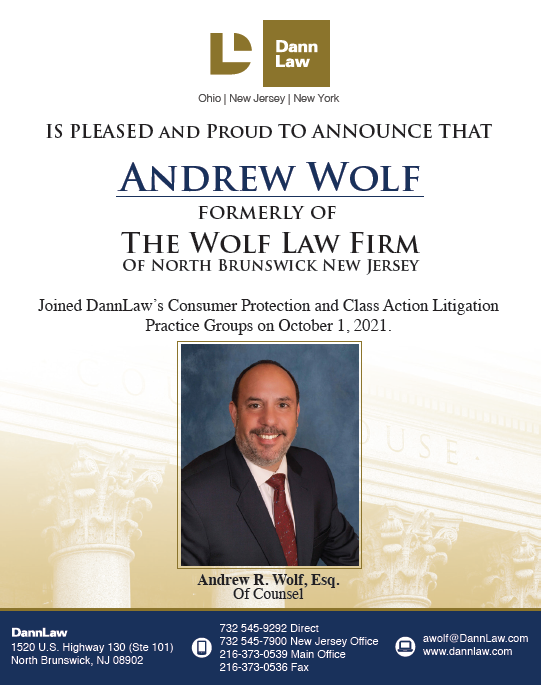 DannLaw founder and former Ohio Attorney General Marc Dann announced today that Attorney Andrew Wolf of North Brunswick, New Jersey has become an “Of Counsel” member of DannLaw’s Consumer Protection and Class Action Litigation Practice groups. Wolf, who has earned a reputation as one of the nation’s most effective consumer advocates will be based in DannLaw’s New Jersey/New York office.

“Andrew Wolf’s impressive level of experience, skill, and knowledge will significantly enhance our ability to both fight for middle and working-class families and to handle the influx of cases that will be generated in the coming months as millions of Americans exit mortgage forbearance and the federal foreclosure moratorium sunsets,” Dann said. “We could not have picked a better time to add a talented attorney with Andy’s level of expertise in individual and class action consumer protection law to our outstanding team.”

Wolf, who has resolved hundreds of individual consumer protection cases and been named Class Counsel in more than 135 state and federal class actions since entering private practice 24 years ago, said he eagerly seized the opportunity to join the team of attorneys that has pioneered the use of the nation’s most complex laws to secure justice for consumers and hold corporate wrongdoers accountable for their actions.

“When I opened my first office in 1997, I wrote down a simple mission statement – I am going to be a consumer protection attorney whose goal is to help as many people as possible who have been ripped off or taken advantage of in some way,” Wolf said. “I knew that if I did that I would make a decent living. After accomplishing that goal for 24 years and helping tens of thousands of consumers along the way, my new goal is to continue doing that good work at DannLaw.”

“Our familiarity with and respect for Andrew’s body of work along with the synergies that existed between our two firms served as the catalyst for the discussions that resulted in our teaming up,” Dann said. “I’m confident our new relationship will benefit Andrew, DannLaw, and our existing and future clients while causing nothing but headaches for unscrupulous lenders, scam artists, and corporate miscreants of all types. Andrew and I wouldn’t have it any other way.”