DannLaw Founder and former Ohio Attorney General Marc Dann today expressed satisfaction with the $12.9 million settlement that has been reached in the firm’s class action lawsuit against Well Fargo Bank, N.A. Judge Timothy Black of the Federal District Court for the Southern District of Ohio signed an order approving the settlement on January 25, 2022. More than 1,800 class members will receive between $1,000 and $19,000. While Wells agreed to the settlement, the company admitted to no … END_OF_DOCUMENT_TOKEN_TO_BE_REPLACED

In 2010 Kim Naimoli of Geneva, New York who was struggling to make her mortgage payments in the wake of the 2007-2008 collapse of the housing market, applied for a loan modification under the provisions of the federal Home Affordable Modification Program (HAMP). Over the next six years Ms. Naimoli did everything right: she completed and returned forms, complied with document requests, made her house payments on time, and, in accordance with the law, filed a “Notice of Error” (NOE) when Ocwen the … END_OF_DOCUMENT_TOKEN_TO_BE_REPLACED

As the new year begins nearly all the mortgage support programs implemented in response to the Covid 19 pandemic are coming to an end. That means millions of homeowners who have taken advantage of mortgage forbearance must begin making their house payments again. Many are finding it difficult to secure permanent loan modifications or repayment plans, some are about to lose their homes because the foreclosure moratoriums imposed by the Consumer Finance Protection Bureau (CFPB) have been lifted, … END_OF_DOCUMENT_TOKEN_TO_BE_REPLACED 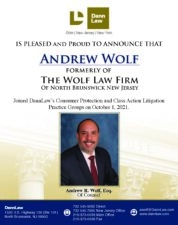 DannLaw founder and former Ohio Attorney General Marc Dann announced today that Attorney Andrew Wolf of North Brunswick, New Jersey has become an “Of Counsel" member of DannLaw’s Consumer Protection and Class Action Litigation Practice groups. Wolf, who has earned a reputation as one of the nation’s most effective consumer advocates will be based in DannLaw’s New Jersey/New York office. “Andrew Wolf’s impressive level of experience, skill, and knowledge will significantly enhance our ability … END_OF_DOCUMENT_TOKEN_TO_BE_REPLACED

It seems like just weeks ago we saw bright light at the end of the COVID-19 tunnel. Turns out that thanks to people who refuse to be vaccinated and the resultant spread of the highly contagious Delta variant of the Coronavirus that light may once again be an oncoming train that puts both lives and the nation’s economic recovery at risk. To eliminate that risk, we encourage everyone who has not already been vaccinated to roll up their sleeves and get their shot ASAP. Unfortunately, the … END_OF_DOCUMENT_TOKEN_TO_BE_REPLACED 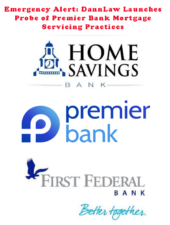 If you are a former Home Savings or First Federal customer who now banks with Premier, contact us TODAY so we can protect your family’s financial future and fight for the monetary compensation you need and deserve. The slogan “Better Together” used by officials of Home Savings Bank and First Federal Bank to characterize the merger that created Premier Bank in April 2020 will ring hollow if the new bank has violated the federal laws and rules that govern mortgage lending and servicing by … END_OF_DOCUMENT_TOKEN_TO_BE_REPLACED

On Tuesday, April 27, the Consumer Financial Protection Bureau announced that Mr. Cooper/Nationstar has been withdrawing multiple mortgage payments from the bank accounts of hundreds of thousands of consumers without authorization. If your mortgage is serviced by these companies and your payments are automatically withdrawn from your bank account, you MUST do two things NOW: Contact your bank to determine if your account has been debited for multiple payments. If you are a … END_OF_DOCUMENT_TOKEN_TO_BE_REPLACED

A lot has changed since we posted our last update. A new president is in the White House, mortgage forbearance programs and foreclosure moratoriums have been extended by the federal government, a $1.9 trillion stimulus package is working its way through Congress, millions of Americans have been vaccinated against the coronavirus and the entire U.S. population may be inoculated by early summer. For the first time in a very long time, there is light at the end of the COVID … END_OF_DOCUMENT_TOKEN_TO_BE_REPLACED

The U.S. Supreme Court’s decision in Seila Law v. Consumer Financial Protection Bureau marked the culmination of a years-long attack against the agency by the business community, Congressional Republicans, and the Trump administration. It also provided a major dose of “be careful what you wish for because you just might get it” for the powerful forces who have been trying to destroy the CFPB since it was created in the wake of the collapse of the nation’s housing market in … END_OF_DOCUMENT_TOKEN_TO_BE_REPLACED

Today, we’re going to tell you story about good vs. evil, right vs. wrong. The main character in the tale is Riad Ghosheh who owns a home that Ocwen Loan Servicing LLC and PHH Mortgage Services tried to steal. They’re the bad guys. How bad? As of this year, more than 11,000 complaints against Ocwen had been lodged with the Consumer Financial Protection Bureau (CFPB). PHH, which Ocwen acquired in 2018, has been tagged 781 times. Ocwen, a company we’ve fought and written about many … END_OF_DOCUMENT_TOKEN_TO_BE_REPLACED